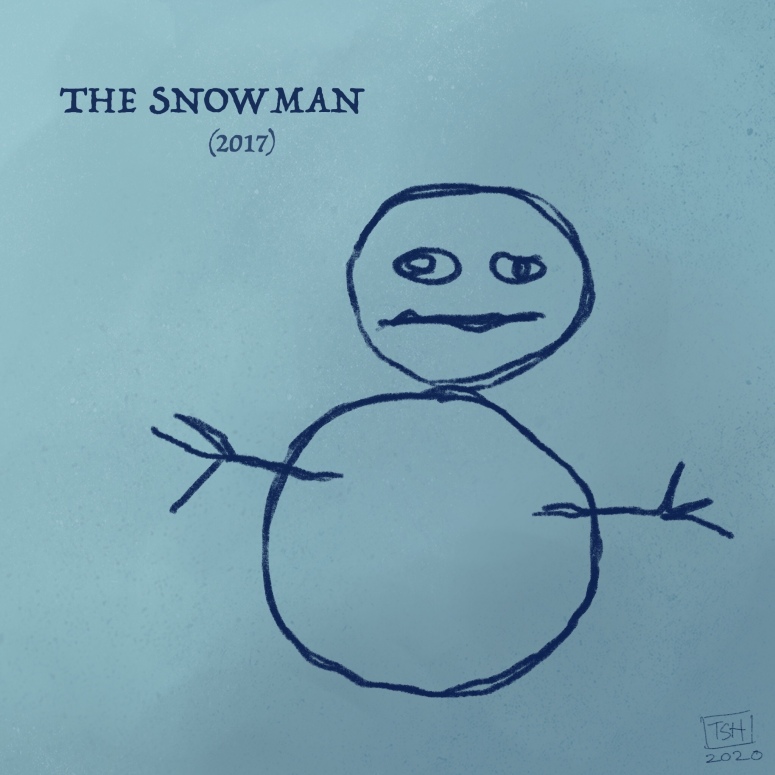 Did they forget to add real credits at the start or did the graphic design place just give up?

Did they spend all their budget on these banging scenic wide shots and that one big swanky party scene?

Why is this character named Harry Hole? Is it a translation error?

Why does Michael Fassbender always look dead? Is it alcoholism or bad grading?

Why does Harry continue to live in his apartment when the walls have been torn out to spray for toxic mold and not replaced?

How is the killer already in his car when we already know he was following way behind this woman?

Why are there random white flashes in scenes?

Why do we see scenes from nine years in the past even though nobody in the present was there to remember them?

Why do only two people in the film smoke when they keep cutting to cigarette butts at crime scenes (which nobody ever finds or comments on)? Why does The Great Detective never see them right there?

Why do they say the killer only strikes when it snows when we’ve seen that it wasn’t?

Why is half the dialogue recorded in voiceover or badly dubbed in? Is this a prank?

Why does Chloe Sevigny just suddenly have a twin? Why did they need a snow truck to drop Harry off when we already saw that the house is literally 10ft from where he just was? How did he know to look in the tank and how did the killer get in/out?

Why doesn’t Magnus get a promotion? He literally has every bit of useful plot information immediately ready as soon as someone asks for it. Is it because he has to wait to be told to give people crucial information?

Why do neither of the detectives working on this case know the same information?

Why does everyone in Norway except for two third-tier supporting characters speak with a proper British accent?

What is his relationship to his ex-girlfriend’s son? Why do they hang out? Is he just using him for his cell phone? WHY DOESN’T THIS POLICE DETECTIVE OWN A CELL PHONE? Why is he having police matters forwarded to a minor’s phone?

WHY SNOWMEN? Like, they ALSO show up at every crime scene but nobody ever makes any connections. IT’S THE NAME OF THE FILM AND THIS NEVER GETS EXPLAINED.

Why coffee beans? We the audience know why, but nobody else ever once comes close to even noticing them.

What is the deal with the entirety of Val Kilmer’s plotline? Why do we see something that nobody in the rest of the movie knows happened?

Are we in the middle of this? The start? Near the end? There’s been zero signposting of progress in either the killer case or the plot.

Why are the police just leaving a crime scene to be eaten by birds?

Is lying down on top of someone whose house you just broke into and who just attacked you because you broke into their house really the best way to resolve this situation?

Why does nobody ever follow up on JK Simmons? He’s literally the last person to see a victim alive after taking her photo with his phone IN PUBLIC WITH WITNESSES and then gives her his room card. HOW DID THE KILLER GET IN THE ROOM? How does nobody notice Rebecca Ferguson’s giant recording device? You can see it across the room! How did the killer find and move her gun when she was in the room the whole time? When/where did she get changed?

Who was the girl who had her boobs out for JK Simmons? She didn’t seem happy about it but then she just shows up again opening doors for people and then that entire plotline gets dropped. Who is she? IS SHE OK?? Why was Rebecca Ferguson even following her in the first place?

How does Harry know where to go to find his not-family? How does the razor-wire gun work and why does that exist? Why do none of the letters in the trailers show up in the film?

How did Harry not see the killer standing in the middle of a frozen lake in daytime not forty paces away? Is it because he’s just slightly out of shot? Why did the ice suddenly break when Harry was standing right there not a minute before?

How does Harry always only have half a cigarette even when he didn’t have a lit one two cuts earlier?

Is this meant to be a parody and something (a lot of things) got lost in the edit? It’s two hours long! What did they cut?? Besides all the resolutions to all the plot threads, that is.

How did they get this cast in this film?

And then why does the movie just… end?

Can someone give me whatever this cost to make?