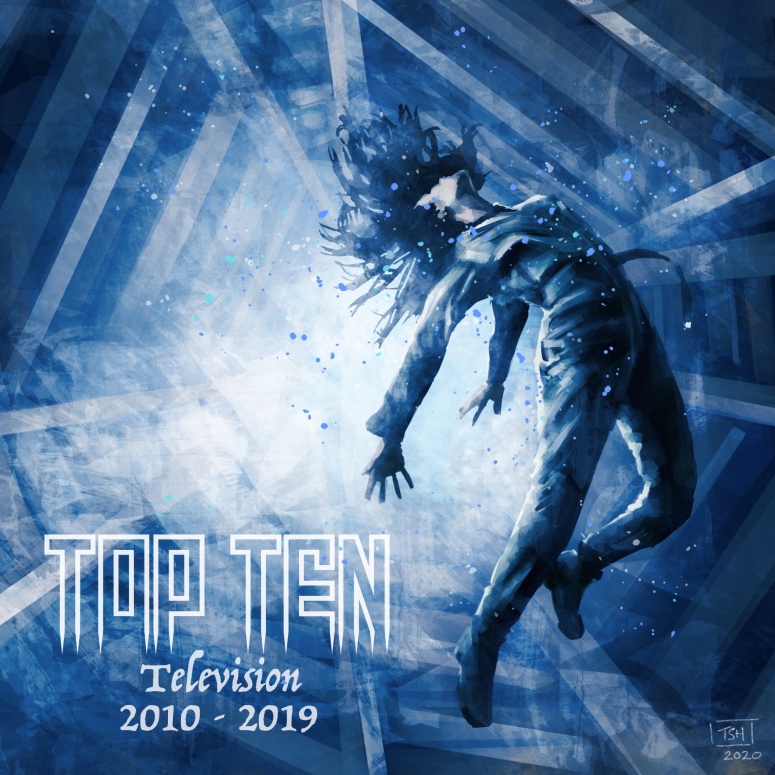 One of the things I struggled with most when compiling my top film picks for 2010-2019 was that the decade saw such a dramatic shift to a gilded era of television, much of which matched and even surpassed their cinematic bretheren.

There’s so much that is now possible in the episodic format that was unthinkable even a decade ago, and truly these last ten years represent a new high water mark.

As such, I’ve given my favourites their own list, in no particular order, here:

If David Lynch had decided to just keep running THE RETURN indefinitely without offering any more clarity or explanation than what is presented here I would still be tuning in every week just to inhabit the surreal, hallucinogenic dreamspace he has created. Did it resolve anything from the original series some 30 years on? No. Do I care? No.

Without contest the best scifi show in a generation, the adaptation of the now nearly-complete book series by James SA Corey – the pen-name of two authors collaborating, one of whom was once George RR Martin’s assistant. It’s the highest pedigree of science fiction: capable people navigating impossible situations in the horrifyingly deadly vaccuum of space and the cruel limitations of physics, the human body and the psyche. Oh, and it has tense political drama coming out its ears. Every damn episode feels like a season finale, and as the stakes keep evolving you grow to love characters you once despised. Get invested, and be prepared to say “daaaaaaaaaamn” a lot.

Of all the gold Michael Schur spun this past decade, this feels the most tightly realised. It’s wholesome while being vulgar, sincere and heartwarming and utterly, inanely hilarious. Every single episode somehow ups the ante and changes the goalposts in some way and the cast of characters is among the best of any comedy ever. There are throwaway lines and deadpan deliveries that make me tear up with laughter even remembering them. Chances are you skipped over this, but prepare to fall in love.

THE HAUNTING OF HILL HOUSE

The be-all-and-end-all of ghost stories, as far as I’m concerned. One part flashback to a family renovating an ancient mansion, one part modern day exploration of how the trauma each member experienced there has manifest itself in their adult life after they were forced to flee one terrible night by the ghosts that dwell there. Utterly chilling, tragic and unsettling. Watch the shadows when they are in the house – there are ghosts literally everywhere and you won’t be able to unsee them.

Julia Louis-Dreyfus deserves every accolade she received for portraying the most insane (fictional) monster ever to set foot in the White House. Her entire staff are a supporting roster of pathetic, hateful deplorables and the way they tear each other apart is poetic, savage and hysterical. This has to have been the most entertaining writers’ room to have worked in for the entire decade.

As staggeringly artful and breathtaking as it is viscerally stomach-turning, this is the definitive take on Hannibal Lecter. Sorry, Anthony Hopkins, but Mads Mikkelson brings an otherworldliness to a brilliant psychopath that can’t be matched. Oh, and the visuals are to die for. Still holding out hope that Bryan Fuller is able to pull this insanely talented cast back together to finish the last SILENCE OF THE LAMBS arc and place a jewel in this bloody crown. Just don’t watch it if you plan on eating anytime soon.

THE LEGEND OF KORRA

A Western take on anime conventions that places a flawed, very fallible protagonist granted immense power in a world that respects, fears, reveres and hates her in equal measure. Each season sees her face the embodiment of some aspect of her destiny through people and ideologies, people who want to use her, people who remain true and genuine, and the toll that such a burden takes on someone who never chose to be granted the unifying power of a hero. Every villain is someone Korra could be, but for a few decisions. It also has some of the best fight choreography out there and the animation is sublime. And just quietly I really love the romance that emerges right at the very end.

Yeah, a vocal slice of the fan base are some of the shittiest people that the internet ever hocked up and spat out, but that doesn’t stop this from being a shatteringly imaginative, outrageously clever and serrated skewering of any and every scifi trope out there. For every self-important douchebag gatekeeping their precious show as “too intelligent for most people” there are catastrophically creative and gut-bustingly funny gags wrapped around a poignant self-awareness that seems to sail right over aforementioned douchebags’ heads. But then, maybe they aren’t as smart as they think they are.

It’s impossible to really describe Donald Glover/Childish Gambino’s irreverent grab-bag of thoughts and narratives outside of flat-out explaining every episode beat for beat. Each one of them is something different, more a collection of ideas and feelings articulated with charismatic aplomb around the understated story of a guy trying to straighten his life out, starting from the bottom. Sometimes surreal, sometimes too real, “slice of life” feels like a disservice to what’s on display here. You should just watch it.

As episodic storytelling goes, this is right up there with the greats in terms of cinematic ambition. Sure, sometimes the execution falls a little short of its lofty reach but damn if there isn’t some of the best hours of television the medium has ever offered up in there. S02E08 (“Kiksuya”) is a masterpiece unto itself, and also a beautiful microcosm of all the tricks and turns that Jonathan Nolan and Lisa Joy have so loving crafted in a surprisingly complex show about a robot cowboy theme park, the nature of humanity and the fragility and subjectivity of reality itself.

OVER THE GARDEN WALL